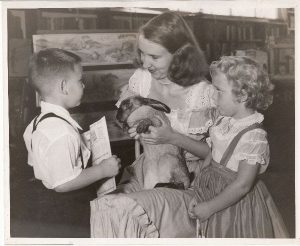 Like many children’s stories, this one begins with “Once upon a time” — but this isn’t a hare-brained story of imagination. It is a real story about the real rabbits that once lived in our library.

There once lived a rabbit, a Belgian Hare, in the Boys and Girls Room at the Alameda Free Library. Miss Claire (pictured above in 1954 with Peter Rabbit and 2 children), called the children’s story time “The Peter Rabbit Club.” She wanted a real rabbit to help her introduce the children to reading, and found a beautiful Belgian Hare at the Alameda City Pound. The children named him Peter Rabbit. Peter liked the library, the children, and especially story time. He liked to eat lettuce, carrots, and sometimes even books. He became so famous that he appeared in a short film shown on the Mickey Mouse Club to introduce children to libraries. His screen name was “Hare Brain.” You can view the clip on our YouTube Channel here or by watching below:

Peter, aka Hare Brain, was a very quiet library patron and lived happily in the library for eight years. He was followed by library rabbits Flopsy, Mopsy, Peter II, and Cotton Tail, who were themselves followed by a cat named Jenny. Sadly, after Jenny died, the library enacted a no pet policy. But if you listen closely, you might hear the thumps of rabbits happily hopping through the children’s sections of Alameda Free Library.

Share on FacebookShare on TwitterShare on Linked InShare by Email