On December 10 in the Stafford Room of the main library, popular docent Marsha Holm presented “Paul Gauguin: A Spiritual Journey” from the Legion of Honor Museum. She began by asking the large audience if any of them considered the 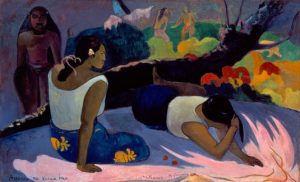 Gauguin, she said, was a rule breaker extraordinaire. From the time his wife took herself and their five children away from their home in Paris, Gauguin’s life was marked by self inflicted turbulence and restlessness. In the decade starting in 1885 he lived in Copenhagen, Paris (several times), Brittany, Arles, Martinique, Panama, and finally twice in Tahiti. Though in his early career he was clearly influenced by the Impressionists, particularly Cezanne and Pissarro, he sought to surpass their achievements. He openly courted controversy through his choice of exotic subject matter and intensity of color.

This was Ms. Holm’s second consecutive docent lecture at the library. In November she presented “East Meets West,” the Legion of Honor’s exhibition of jewels of Mughal India, which were introduced to Europe in the nineteenth century. This was an amazingly extravagant display of bling.

The Gauguin presentation wrapped up a full schedule of well attended docent programs for 2018. FAL Board President Karen Butter took the opportunity to thank FAL’s coordinator, Kumar Fanse, for his dedication and hard work on the program.

This free program will continue in 2019, with a program from the Oakland Museum of Ray and Charles Eames, February 11 and one on Claude Monet March 18.