Please note: Registration is required for this event and can be done here: https://zoom.us/webinar/register/WN_WUOFKu8ESh-yRcNrWWbmfw 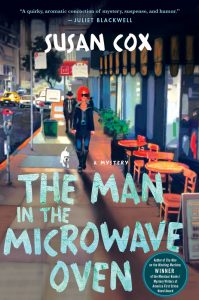 Susan Cox’s first novel, The Man on the Washing Machine, won the Minotaur Books/Mystery Writers of America First Crime Novel Competition. Her second novel, The Man in the Microwave Oven, was published last year. It continues the adventures of Theo Bogart which began in “Washing Machine.”

Theo fled to San Francisco from her native England where a murder and family tragedy made her the scandal du jour in the tabloid press. She changed her name and built an undercover life in a close-knit and delightfully quirky Polk Street neighborhood. But events soon conspired to force her to work through exactly the same kind of scandalous mystery she was trying to leave behind.

Susan Cox says, “I feel lucky to be equally at home in California and Florida, with a large and boisterous extended family in England, including twenty-three cousins which, even to me, seems like a lot.” 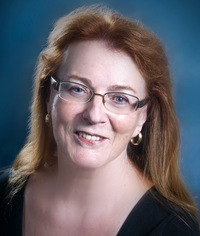 She wears a Starfleet communicator pin and a Mystery Writers of America membership pin, but seldom at the same time. Her family shares their lives with a standard poodle called Picasso, and a cat called Midnight who wandered in a few months ago and decided to stay.

A former newspaper reporter, she has also designed marketing and public relations for a safari park, raised funds for non-profit organizations, been president of the Palm Beach County (Fla.) Attractions Association, and served on the board of the Florida chapter, Women’s National Book Association.

Bay Area folks who are interested in purchasing The Man on the Washing Machine or The Man in the Microwave Oven before this talk can order directly from Books Inc. via their website.