A recording of this talk is now available to view here:
https://youtu.be/AmXJOzxWcdI 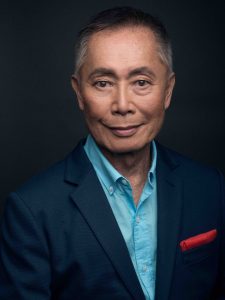 George Takei has captured hearts and minds worldwide with his captivating stage presence and outspoken commitment to equal rights. But long before he braved new frontiers in Star Trek, he woke up as a four-year-old boy to find his own birth country at war with his father’s — and their entire family forced from their home into an uncertain future.

In 1942, at the order of President Franklin D. Roosevelt, every person of Japanese descent on the west coast was rounded up and shipped to one of ten “relocation centers,” hundreds or thousands of miles from home, where they would be held for years under armed guard. 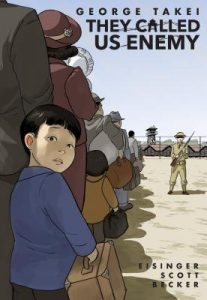 The graphic novel They Called Us Enemy is George Takei’s firsthand account of those years behind barbed wire, the joys and terrors of growing up under legalized racism, his mother’s hard choices, his father’s faith in democracy, and the way those experiences planted the seeds for his astonishing future.

What does it mean to be American? Who gets to decide? When the world is against you, what can one person do? Join us for our conversation with this American icon who has spent his whole life grappling with these questions.

George Takei is a social justice activist, social media superstar, Grammy-nominated recording artist, New York Times bestselling author, and pioneering actor whose career has spanned six decades. He has appeared in more than 40 feature films and hundreds of television roles, most famously as Hikaru Sulu in Star Trek, and he has used his success as a platform to fight for social justice, LGBTQ+ rights, and marriage equality. His advocacy is personal: during World War II, Takei spent his childhood unjustly imprisoned in United States internment camps along with 120,000 other Japanese Americans.

He now serves as Chairman Emeritus and a member of the Japanese American National Museum’s Board of Trustees. Takei served on the board of the Japan-United States Friendship Commission under President Bill Clinton, and, in 2004, was conferred with the Gold Rays with Rosette of the Order of the Rising Sun by the Emperor of Japan for his contribution to US-Japan relations.

Those who are interested in purchasing They Called Us Enemy before this talk can order directly from Books Inc. via their website (click here for paperback or hardcover).