Please note: Registration is required for this event, and can be done here: https://zoom.us/webinar/register/WN_PMdIRgvQQbafGMPZcV1z4w 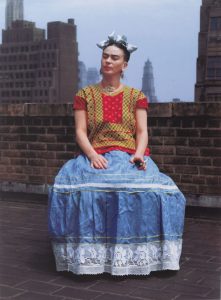 On Monday, July 13 at 7:00 pm the Friends of the Alameda Free Library will continue its Friends @ Home series of online events with a presentation by art docent Kathryn Zupsic of Frida Kahlo’s work.

Mexican artist Frida Kahlo’s unique and immediately recognizable style was an integral part of her identity. Kahlo came to define herself through her ethnicity, disability, and politics, all of which were at the heart of her work. Frida Kahlo: Appearances Can Be Deceiving is the largest U.S. exhibition in ten years devoted to the iconic painter and the first in the United States to display a collection of her clothing and other personal possessions, which were rediscovered and inventoried in 2004 after being locked away since Kahlo’s death, in 1954. They are displayed alongside important paintings, drawings, and photographs, including images from the 1930s when she lived in San Francisco with her husband, Diego Rivera.

Kathryn Zupsic has been an art educator for over 25 years, working as a docent and lecturer for the Santa Barbara Museum of Art, the de Young Museum, Legion of Honor, and SFMOMA. Her specialties are modern art movements and Latin American art. A native of Portland, she has a degree in Spanish and Latin American Literature from the University of Oregon and is a graduate of La Varenne chef school in Paris.