Regular attendees of the FAL Art Docent series were treated to two excellent presentations over the last month, “Monet – The Late Years” on April 29 and “Rubens Early Years” on May 13.

Docent Alfred Escoffier from the de Young Museum discussed the later works of Claude Monet (1840 -1926). While making some reference to the artist’s early work central to the burgeoning Impressionist Movement, the discussion was primarily about his later years at his home in Giverny. After showing a few of the artist’s works from the early Impressionist period, Escoffier moved on to Monet’s purchase of the house in Giverny and the development of its beautiful gardens. His work in this period began showing the influence of Japanese art, as typified by iconic pictures of the Japanese bridge and the water lily pond.

The Legion of Honor Museum’s Gretchen Turner moved our historical focus from Monet’s lifetime back 300 years to the period of the Eighty Years War and the life of Peter Paul Rubens (1577-1640). Turner’s explanation of the history of Rubens’ hometown of Antwerp was very informative. Antwerp was near much of the fighting, which Rubens was able to avoid by moving abroad. In Venice, Milan, Mantua, and finally Rome he developed his talent in religious and mythological works, as well as portraiture. By the time of his return to Antwerp when his mother died in 1608, Rubens was one of the most sought-after artists in Europe. 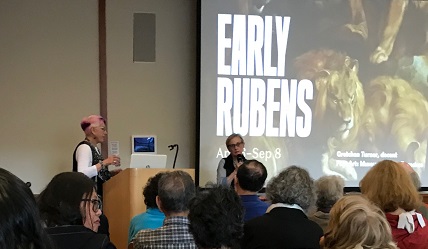 Despite a period in the nineteenth century when Rubens’ work was greatly disrespected, today his reputation has rebounded considerably. In 2016 his painting “Lot and His Daughters” sold at Christies for 44,882,500 pounds, the highest price ever achieved by an old master’s work.

The next Art Docent Program will bring us further up to date with a presentation on Andy Warhol, July 8 at 6:30 pm. As always, it will be free.